Enkosi is a 5-year-old boy who started at the Life Child Preschool last year. He had previously attended another preschool in Kosovo but was asked to leave as he was deemed ‘a trouble maker’ and the teachers found it hard to discipline him. Soon after, both of his parents lost their jobs and it became financially impossible for them to afford to send him to another school. He was then enrolled into the Life Child Preschool and has since blossomed!

His teachers describe him as a happy child and say he really enjoys school. He has developed a lovely personality and naturally gravitates to helping others in the class, as well as volunteers to prepare the morning snacks. He is a talkative little boy and is often seen telling his friends where his dad took him in his car or what he did with his dad. Sometimes the teachers find him in the book corners reading a book out loud, naming what he sees.

His mother, Zimkhitha, describes his behaviour change as significant. She said the difference is ‘huge’. She shared that before attending Life Child Preschool he would play outside and be away from home for hours. Now he spends most of the time showing his little sister everything he does at school and teaching his family the new songs he has learnt…singing happily away. She said he always reminds them (his mom and dad) to pray before eating. “He is a great example to his younger sister,” she said.

Much has also improved with his mother and father (Mhlangabezi). While Zimkhitha has since found a job as an office assistant in a debt collecting office, Mhlangabezi uses his old car to provide ‘trips’ for people to the clinic or hospitals and children to school. The additional income they receive is R800 for the 2 Child Support Grants.

Mhlangabezi has shown gratitude to Life Child by ‘giving back’. He noticed paint flaking on the wall of the preschool and shared that he was a painter by trade and would like to fix it. After doing a neat and clean job, Life Child paid him to paint other rooms in the house. He is a wonderful asset to us, Life Child, as he is a “Mr Fix It” and is able to help with other odd jobs, and lives nearby. 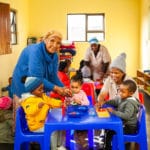 An inspiring story of how mother and daughter duo started a preschool. 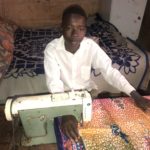 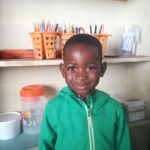 One Life Story - Hope in Malawi